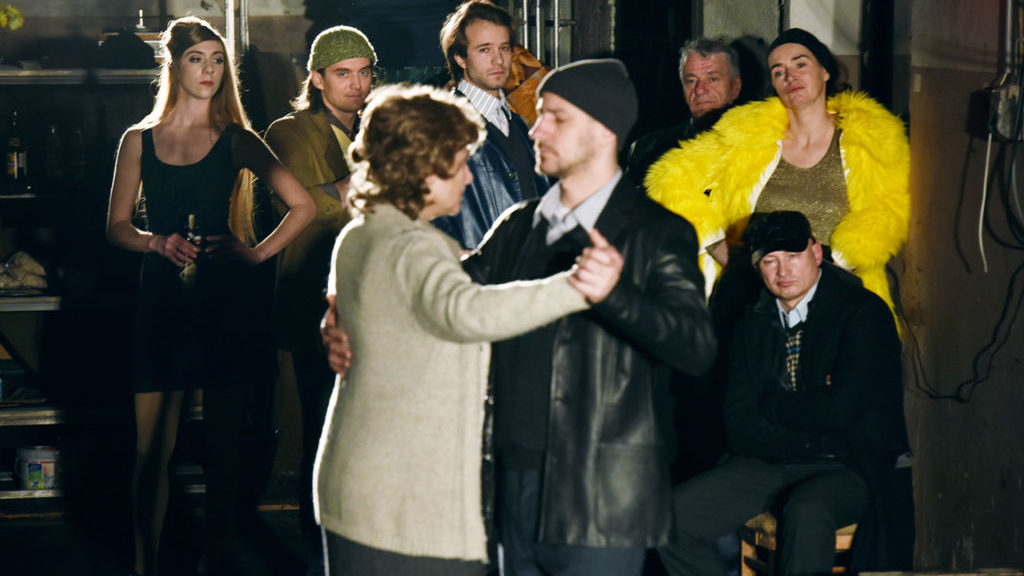 Translated from German by Urška Brodar

Translated from Serbian by Jernej Potočan

Germany, 1970s. A 40-year-old Moroccan, El Hedi Ben Salem MʼBarek Mohammed Mustafa, called Ali, is one of the many migrant workers from his country, trying to pursue happiness in the golden years of economic migrations. Emmi, a 60-year-old widow, earns a living as a cleaning lady. A genuine feeling of warmth and attraction springs up momentarily between her and Ali. However, their relationship stumbles upon strong prejudice and lack of understanding from their environment: Emmi’s female neighbours, co-workers, her grown-up children and even her local shop-keeper. They grow increasingly cold and even hostile. Ali’s origin and his social position of a »guest worker« challenge their narrowly restricted notions of humanity, while they are being equally upset by his relationship with Emmi, 20 years his senior. In his acclaimed movie Ali: Fear Eats the Soul (1974), Rainer Werner Fassbinder divulges a multi-layered and gripping love story set on the margins of society. Using his signature modernist aesthetics he allows the viewer to confront social stereotypes that even today – especially in view of the recent wave of migrations, xenophobia and conservatism – remain neuralgic points of society and humanity.

It’s raining outside. In the bar, Arabian music is playing. Guests are mostly immigrants. An elderly woman enters the bar and orders a coke. A blond waitress taunts a young Arabian man to ask the woman to dance. Emmi and Ali are dancing. Other guests are watching them. We will see their gazes throughout the story many times.
Them against us.
An external refugee and an internal refugee are dancing.
Emmi and Ali are plagued by a series of differences in terms of race and age, and yet they are attracted and bonded into an impossible romantic relationship by something more substantial: they are both lonely. Shyly, Emmi says that she’s a cleaner working two shifts and that people look down upon her. Ali, however, puts it more bluntly:
»Work, work, always work, always be drunk. […] German masters, Arab dogs. The Germans are not good with the Arabs. «
»Why?«
»I don’t know. The Germans are not the same people as the Arabs. «
By being a couple, Emmi and Ali are an insult to the entire neighbourhood.
Emmi and Ali are happy when they are on their own, but they can nonetheless escape their toxic environment. The story toys with the genre of melodrama, but what prevents it to become one is silent despair. Happiness isn’t always fun.
»Why are you crying?«
»I’m so happy and so full of fear too.«
»Have no fear. Fear is not okay. Fear eats your soul.«
»That sounds nice. Is this what the Arabs say?«
»Yes, this is what all Arabs say.«
In Fassbinder, one is used to brutal sexuality, while here we are confronted by stunning tenderness.
»When we’re together, we have to be kind to one another.«
»I don’t want any other women. I only love you. »
»I love you too.«