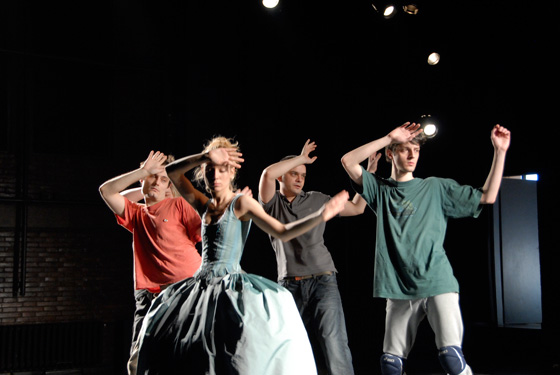 At a particular moment, some months ago, a particular group of people got invited to enter a particular process. By deciding to accept the invitation they appeared, dragging with them, into the space, their own skills, desires, affinities and projections. They talked with the choreographer and to each other, they proposed certain gestures, situations and ways of working, they refused some other. They started dressing up, they walked repeatedly across the bare stage, they uttered words addressing empty audience, fell out of time and away from each other and came back together. They danced. Performative frame was generated not by any singular intention, conceptual articulation or personal phantasy, but by an intense and unpredictable interaction and friction between MANY incongruent substances. TOO MANY.

So yes, indeed, WE ARE TOO MANY, but the question
persist – too many for what? In the actual encounter with the audience, with innumerable eyes of all those who do not know
any of the above, we will have to find provisional answer to this uncomfortably question. And by confronting the dilemma
together with spectators, implicating strangers in our own “meaningless” multitude, we will, hopefully discover
content and form, not only for this performance, but for many
performances to come. Because, in a world made of accidental and fleeting encounters, TOO MANY IS NEVER ENOUGH